First, Visit the Tuol Sleng Prison Museum Prior to 1975, Toul Sleng was a high school – a set of classroom buildings in a walled compound. When the Khmer Rouge came to power in 1975 they converted into the S-21 prison and interrogation facility, administered by Kaing Guek Eav, a.k.a. ‘Duch,’ who is currently on trial for his actions at S-21. Inmates at the prison were held in tiny brick cubicles and systematically tortured, sometimes over a period of months, to extract the desired ‘confessions,’ after which the victim was inevitably executed at the killing field of Choeung Ek just outside the city. S-21 processed over 17,000 people, less than a score of whom survived. The Tuol Sleng compound now serves as a museum, a memorial and a testament to the madness of the Khmer Rouge regime. Much has been left in the state it was in when the Khmer Rouge abandoned it in January 1979. The prison kept extensive records, leaving thousands of photos of their victims, many of which are on display. Paintings of torture at the prison by Vann Nath, a survivor of Toul Sleng, are also exhibited. For more on the S-21 check out Chandler’s book, ‘Voices from S-21.’

The Choeung Ek Memorial is now a group of mass graves, killing areas and a memorial stupa containing thousands of human skulls and long bones. The memorial is about a 20-40 minute drive from the center of Phnom Penh. There is also a small souvenir shop as well. For sake of historical context, combine your trip to Choeung Ek with a visit to Toul Sleng Genocide Museum (the former S-21 Prison) in Phnom Penh. Also see David Chandler’s book, ‘Voices of S-21’ for the most systematic and complete account to date of the history and operation of the S-21 Prison. 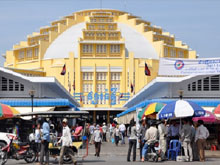 After lunch time, we will have time this afternoon to explore Psar Toul Tom Pong, also called the “Russian Market”. This market became the foreigner’s market during the 1980’s when most of the foreigners in Cambodia were Russians. It is of far less architectural interest than the Central Market but has a larger, more varied selection of souvenirs, curios and silks. Like the Central Market, there are several jewelers and gold-sellers, but it also carries huge selection of curios, silks and carvings, it is one of the best markets in town to buy fabric, and it offers the largest selection of VCDs, DVDs and CDs of the traditional markets. Most of the DVD vendors are located on the south side near the southeast corner of the market. Most of what the visitor might want is in the same general area on the south side but the rest of the market is well worth exploring. Food and drink stands in the middle of the market for hygienically adventurous visitors.

Later this afternoon, we will take one hour boat cruise on the Mekong river. Driver and guide goodbye to you at your hotel.